In a race where all eight finalists were from the Geelong region, Weblec Jet, trained at Anakie by Jeff Britton, clocked a near-record 29.54sec. His time was only .02sec off the 29.52sec track record, set by Fernando Express – trained by Britton’s older brother, Rob – on July 27, 2018.

Weblec Jet turned the tables on Yozo Bale, who narrowly defeated him in the Ballarat Cup Consolation (450m) only two weeks ago.

WATCH: WEBLEC JET (4) began like a rocket and was never headed in the Geelong Gold Cup, defeating YOZO BALE (2) and SWEET AS EMM (9) in 29.54sec, just half a length off the 520m track record.

“He couldn’t quite get to Yozo Bale at Ballarat, but I thought the 520m would help him better,” was Britton’s succinct assessment.

It was a big night for the Britton family as Jeff’s nephew and Rob’s son, Tim, 31, had the better of his uncle in the Cup Night Match Race (520m) – dubbed the “Battle of Britton”.

Utah Express recently won a Launching Pad Consolation in a scorching 29.22sec at Sandown Park. He was also a finalist in the G2 Richmond Derby. Weblec Jet on the presentation dais. Weblec Jet crosses the finish line in a flying 29.54sec. 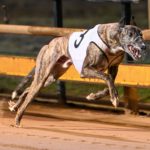