It was the first meeting held on a straight track in NSW since October 18, 2014 at Appin.

“I didn’t think I would ever see it,” said Richmond GRC President Peter Rodgers.

“It started off just a slipping track. But you’ve got to remember this is new for old.

“The old track used to go up here. I think it was closed in the early ’60s to make way for a circle track when the TAB circuit came in.

“But basically it’s the same route that the old track went. It was a 323-yard track and this is 324-metre track. There’s a lot more technology on this one, with the drag lure and no rail.”

The opening of Richmond’s straight track is a great step forward for NSW, with huge racing and welfare benefits.

It will also add great impetus – and a fourth competing state – to the National Straight Track Championship, which was held for the first time in 2019 but wasn’t able to be conducted in 2020 due to COVID-19.

Healesville General Manager Cynthia O’Brien was among the large crowd in attendance at the western Sydney’s club’s historic meeting and Rodgers didn’t hesitate when O’Brien quizzed him about NSW’s National Championship participation.

“One hundred per cent!” Rodgers said.

“But with a lot of guidance from yourself.”

Somewhat fittingly, considering the lengthy break between straight track meetings in NSW and much longer gap between straight meetings at Richmond, the first race on the new track was won by Hiatus, trained by Shaun Evans.

“It will benefit our local trainers in the fact that the pressure on the dogs will be taken off them running up the straight and the longevity of the older dogs to be able to race for longer,” said Rodgers.

“It’s just a difference to the circle track where there’s so much pressure on them and it will mix and match their preparation and racing patterns and I think it will be just great going forward.” 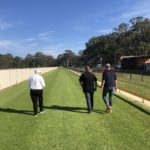 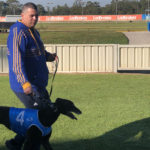