In fact, all eight finalists in next Friday’s $50,000 to-the-winner Cup final are from the Geelong region, as are the two reserves.

It’s sure to be a huge 24 hours for Grenfell who has Tiggerlong Tonk engaged in tomorrow night’s $150,000 to-the-winner G1 Perth Cup at Cannington.

He was a National Derby finalist in January and runner-up in last year’s G3 Warragul St Leger.

HEAT 1: WEBLEC ACE (4) played the role of stalker to perfection, reeling in the lamplighter AUSSIE SECRET (6), while SWEET AS EMM (1) stormed into second place.

HEAT 2: JUNK FOOD JUNKIE (7) was pressured throughout but stuck to her guns and defeated a fast-finishing MEPUNGA WARRIOR (6) and JAX BALE (3).

HEAT 3: The Tim Britton-trained CARRY ON ANGEL (2) took control on the home turn and held off a persistent BAROOGA SMOKE (1), with LOTS OF CHATTER (4) third.

HEAT 4: YOZO BALE (2) storms into another country cup final with a dominant victory over TOM THE CHEAP (4) and ASTON SILK (3).

HEAT 5: WEBLEC JET (5) pinged the lids and was never headed in the final heat, defeating WELL GROUNDED (2) in the quickest time of the night.

Revenge was sweet for Carry On Angel who finished third to Barooga Smoke in the G3 Easter Gift (515m) at Sandown Park on April 1. Yozo Bale was smiling all the way to the finish line, clocking 29.80sec. Weblec Jet takes out the final heat in 29.77sec, the fastest of the five heats. 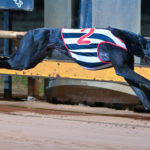 Carry On Angel crosses the finish line ahead of Barooga Smoke in 29.99sec. 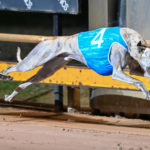 Weblec Ace wins heat one over Sweet As Emm.