It was no illusion… The great Houdini Boy easily ‘unlocked the shackles’ in tonight’s heats of the Group 1 Gold 98.3 FM Sale Cup (650m). Wow, what a grand opening to Gippsland’s ‘Festival of Racing’, which will continue with the Group 1 Sale Cup Final on Boxing Day.

Known as a last-to-first ‘escape artist’ earlier in his career, Houdini Boy ‘handcuffed’ his rivals with a magical display in Heat 1.

Trained by Kelvyn Greenough, Houdini Boy (Mar ’18 Zambora Brockie x Pechey) clocked a sensational 36.78sec – around two lengths off the 36.67sec track record, set by Burn One Down in July 2017.

Last month, Houdini Boy finished third in the G1 Bold Trease (715m) at Sandown, and in September he won the G3 Speed Star (600m) at The Meadows prior to finishing second to Tornado Tears in the G3 Top Cat Video Cup (725m) at The Meadows.

Houdini Boy was TAB’s $3.00 ‘All In’ favourite to take out the rich Sale Cup final on Boxing Day.

Trained by Brendan Pursell, Bobby The Brute (Jan ’18 KC And All x She’s Scandalous) registered his ninth win from 38 starts. But his race stats belie his true ability, given he was runner-up to Simon Told Helen in the G2 Geelong Gold Cup (520m) in October.

Now a four-time G1 finalist, Christo Bale was $4.00 second elect, behind Houdini Boy, for the Sale Cup final prior to the heats.

Gippsland’s ‘Festival of Racing’ runs from December to February and also features the Group 2 Warragul Cup and Group 2 Cranbourne Cup. And half a million dollars is up for grabs! 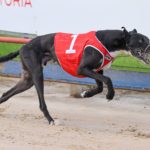 Houdini Boy (1) takes out his heat by a whopping eight lengths. 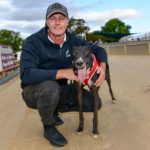 Christo Bale (3) and Zack Monelli (7) battle out the final heat.