The Victorian Greyhound Awards took place at Melbourne’s Crown Casino this evening in celebration of the 2018-19 Racing Season.

Champion sprinter Orson Allen was announced the Victorian Greyhound of the Year, as adjudged by the seven-person panel, based on performances between 1 July 2018 to 30 June 2019.

During that time the fawn superstar won numerous feature races, most notably the Perth Cup and Harrison-Dawson – both Group 1 events – as well as two country cups and the Shootout.

Anakie’s Andrea Dailly was once again named the Metropolitan and Provincial Trainer of the Year, while Julie Mathieson of Greyhound Safety Net received the GRV Board Welfare Award for her efforts in rehoming former racing greyhounds, and Shepparton GRC President Tracey Fothergill was the recipient of the first ever GRV Board Leadership Award.

Greyhound of the Year: Orson Allen

Sprinter of the Year: Orson Allen

Stayer of the Year: Tornado Tears

Metropolitan and Provincial trainer of the Year: Andrea Daily 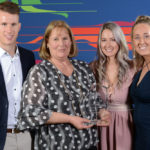