It was his 23rd win from 34 starts, including 12 of his past 16 since being transferred to Thompson by the Dart family in Dulguigan in the Richmond-Tweed region of NSW. His stakes catapulted to $122,435.

Based at Pearcedale, Thompson – who spent most of his teenage years growing up in Traralgon – snared his second Traralgon Cup, 28 years after his superstar Light Of Fire in 1994. (He also trained Annie Doyle ,which finished third in that event.)

Back in October last year, Typhoon Sammy broke Bendigo’s 425, track record with a scintillating 23.28sec performance prior to finishing third in the final. He was also first reserve for the 2021 G1 Melbourne Cup.

And in the lead-up to the Traralgon Cup final, Thompson issued some prophetic words.

“I do reckon the dog prefers out wide… He’ll run a straight line from there, but it’s going to come down to who boxes best.

“He’s going to have to begin similar to his heat performance and if he replicates that, he’ll put himself in the finish.”

In other highlights on a gala night of racing, Gypsy Bun (Box 1) – trained by Andrea Dailly – took out a thrilling $10,000 winner-take-all Cup Night Match Race (395m).

Third in the 2020 G2 Laurels Classic and a finalist in this month’s G2 Warragul Cup, Gypsy Bun notched her 21st win from 88 starts.

A three-time G2 finalist, including runner-up in the Cranbourne Cup, Aston Shine registered his 16th win from 61 starts. 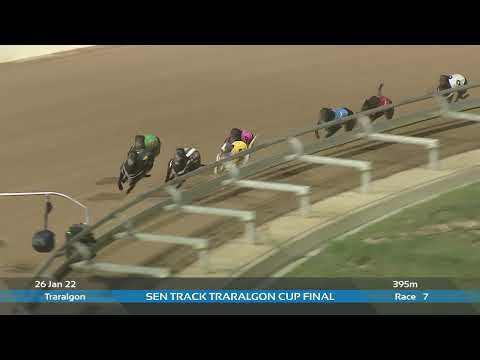 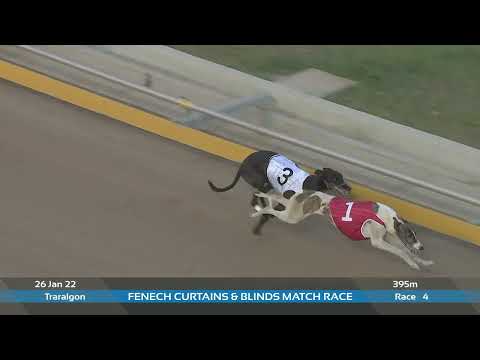 2022 FENECH CURTAINS & BLINDS MATCH RACE
WATCH: Gypsy Bun (B1) proved too strong for Mr. Fix It (B3) in a thrilling match race. Race 6
Aston Shine about to hit in line in his 500m Special Event victory. Race 7
Sprint to the finish, Typhoon Sammy uses the outside of the track in the Traralgon Cup