Little did Paul Radstock realise when he emigrated from the town of Llangollen – situated on the River Dee in Denbighshire, Wales – to Australia in 2005 that greyhound racing would become a passion.

“My wife, Louise, had family and friends over here so we relocated with our daughters, Melanie and Emmy, who were only kids at the time,” Radstock said.

But the catalyst behind his love of the ‘longtails’ were greyhound racing stalwarts Bill and Sheila Donlon from the rural town of Burnbank, around 50km from Ballarat.

“I met Bill and Sheila after joining Talbot Lawn Bowling Club around eight years ago, and shortly after I started helping them out with their dogs,” Radstock said.

A wooden floor layer/sander, Radstock, 54, trains from the Donlon property and now has four in work and eight 17-month-old pups from a Raw Ability x Ruby Rads mating.

“Bill and Sheila have helped me immensely,” Radstock said. “We were living in Maryborough but moved to Evansford to be a bit closer to the dogs.”

Crystal Opal (Oct ’19 Aussie Infrared x Sally Gardens) notched her second win from seven starts and the $2185 first prize more than doubled her previous earnings of $1995. In fact, she only broke her Maiden status on August 4 at Bendigo. 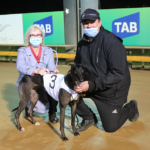 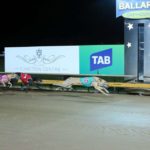 Radstock, who epitomises the grassroots trainer – exactly the rationale behind the Enduro initiative – was gobsmacked with Crystal Opal’s win.

“I didn’t give her much of a chance, but she’s improved around six lengths in nine days. She’s getting stronger and we’re assuming the older she gets the further in distance she’ll go.”

Radstock is a proponent of the Enduro concept, saying “it gives all the small trainers a chance to win something”.

“I entered Crystal Opal’s half-brother, Gardener’s Boyo, in last year’s series and he finished third in the Tier 3 Enduro Cup.

“We won the Consolation this year, but the idea behind this event is fantastic for the rank-and-file participant.”

Untapped went through the series undefeated (three successive wins) and registered her eighth win from 24 starts.

And the $3000 to-the-winner Tier 3 Enduro Cup (545m) was won by the Correy Grenfell-trained Tiggerlong Ginga ($12.50) – a litter sister of his superstar Tiggerlong Tonk, who finished second in the Group 3 Speed Star on the same night at The Meadows.

Grenfell’s perseverance has paid off with Tiggerlong Ginga, who recorded only her 10th win from 85 starts.