Orson makes Horsham his own with electrifying Cup win

It’s one thing to break a track record, but it’s another thing to do it in a big final after finding interference.

That’s exactly what Orson Allen did in tonight’s $67,000 Group 2 CHS Group Horsham Cup (485m), overpowering the front-running Nervous An Weird in 26.87sec. The previous track record of 26.876sec was set by Got Some Wheels last November.

Two months shy of his third birthday Orson Allen appears to be at the peak of his powers right now, having won the Cranbourne Cup and running second in the Group 1 Temlee in recent weeks. However, handler Joe Briffa suggested we may not have seen the best of Orson Allen just yet.

“He just keeps on improving and he’s starting to work out how to come from behind. He’s a real flying machine. He’s one of the best dogs in Australia at the moment,” Briffa said.

As expected, Nervous An Weird (Andrew Paraskevas) was dynamic early from box one, clocking a sensational 6.39sec to the first section as Orson Allen settled in second position. However, a dash for the rail by Orson Allen saw him cop a check, pushing him two lengths off the pace turning for home before powering to the lead in the home straight and winning by 2.5 lengths.

“He got in front of Barooga Brett at the start (while) Nervous An Weird jumped brilliantly and I thought he (Orson Allen) might be in a little bit of trouble, but he worked home really well and to break the (track) record is unbelievable. He’s just flying,” Briffa said.

Bred and owned by the Wheeler family in NSW and trained by Correy Grenfell and Avalon, Orson Allen (KC And All – Desalle Bale) has now had 23 wins from 47 starts, with the $47,000 first prize taking his career earnings up to $313,645.

“Samantha and Correy (Grenfell) have done a great job with this dog, and now the Perth Cup is looking really good for him.”

The other feature race winners on Horsham Cup night were as follows: Orson Allen is happy and content after his record breaking win. 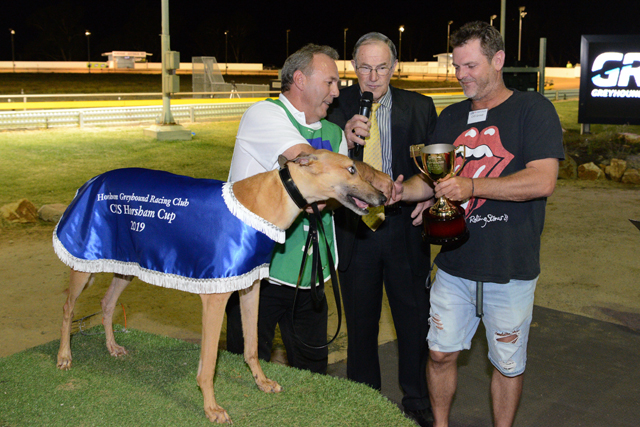 Orson Allen and Joe Briffa with the Horsham Cup. Orson Allen powers to the finish line after finding interference. Trouper takes out the Jan Wilson Memorial, a race named after the former GRV Chair.