If you don’t succeed at first – try, try again! It’s an adage that has stood the test of time.

But it was Britton’s second Super Stayers win, having won with Star Recall in 2016. He also prepared 2020 runner-up, True Detective.

Mepunga Ruby – which won the G2 Summer Distance Plate at Wentworth Park in January and G3 Speed Star at The Meadows in August last year – notched her 19th win from 32 starts, including six of her past eight. She’s now five from eight over the 725m journey and undefeated in three starts from Box 4.

And her super sire, Fernando Bale, has produced three of the past four winners.

Other feature race winners were: 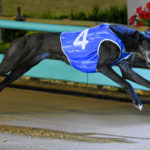