Saturday’s TAB Phoenix night opened with a huge mark of respect to the Aboriginal and/or Torres Strait Islander community with a special Welcome to Country and smoking ceremony.

GRV and The Meadows Board Members were asked to be part of the ceremony, which acknowledged the Traditional Owners of the land.

This was the first live Welcome to Country ceremony ever held at a Victorian greyhound race meeting, and possibly the first of its kind conducted at an Australian race meeting of any code.

Both GRV and The Meadows extended their thanks to Aunty Kellie Hunter, a proud Wurundjeri woman who led the moving ceremony, and also to proud Mutti-Mutti Gunai man, Eric Edwards, who captivated the crowd as he played the Yidiki.

GRV Chair Peita Duncan said the ceremony commenced a relationship with the First Peoples across Victoria which would see such acknowledgments become the norm.

“We were honoured to be included in Saturday night’s ceremony, and we thank all involved in commencing such a journey with greyhound racing within our state,” Ms Duncan said.

Vision from the historical service was later aired as part of the TAB Phoenix coverage on Channel 7’s Thrill of the Chase program.    Watch 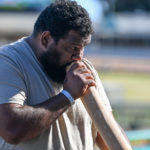 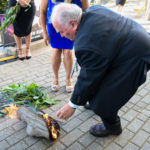 Peita Duncan with the @tabcomau #Phoenix trophy @TheMeadowsDogs earlier tonight - the first ever live Welcome to Country ceremony at an Australian race meeting of any code. pic.twitter.com/ZjYwM9VuHN