Frank Murphy: Born to be a Bookie

Murphy – who was a registered bookmaker for over 50 years – passed away suddenly on Saturday, December 11. He would have turned 90 on December 27.

He had suffered a fall at his Canadian Lakes home the day before and was rushed to hospital. But his lungs filled with fluid and sadly it led to him having a stroke.

Murphy was born to be a ‘satchel swinger’. His father, Tom Snr, emigrated from Cork, Ireland to Australia and became a prominent SP bookmaker and publican in Ballarat.

It’s believed the names of horses and prices were on a board next to the bar at his Ballarat pub, the Australia Felix Hotel (near the site of the Eureka Stockade).

Two men ran the price service where a man on a bike would deliver the overnight prices and then the opening market would be rung through 20 minutes before each race.

Murphy’s brother, Tom Jnr, 83, said his older sibling took out a bookmaker’s licence in 1952 and was the youngest bookie in the state at the time.

“He started off in the ‘pacemaker’ days and a few years later the ‘mechanical lure’ was introduced,” he said.

“Frank fielded at Napier Park, Maribyrnong and White City and at North Melbourne before the MGRA relocated to Olympic Park. He also had a stand at Sandown Park from the early 1960s.”

Tom Jnr, who also ventured into bookmaking, added he and his brother “went everywhere together”.

“We had a stand next to each other at all the tracks we went to… Frank was an absolute gentleman.

“We decided to have the Cup displayed at Sandown, but it became lost until someone found it in a box with Rocky Ros’ 1959 Australian Cup,” Tom Jnr said

Murphy also had more than 100 greyhounds at one stage on his Mount Clear property.

“Rod Deakin advised him to buy a brood matron (Lucky Spree) from Sydney and he put Rookie Rebel (1957 Melbourne Cup & 1958 Australian Cup winner) over her, and the litter were champions. It put him on the greyhound breeding map,” Tom Jnr said.

And he added that during one period, Frank “stacked entries to keep Ballarat GRC viable”. “He also put in money for a roof over the betting ring at Sandown.”

“Dad was always ‘odds-on favourite’ to be the one to lend a helping hand, no matter who you were.” 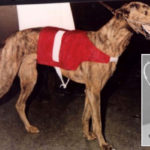 “Frank’s dad ‘wrote betting tickets’ at Ballarat dogs on a Saturday morning, and that’s how the racing side came in for Frank,” he said. “Frank fielded at Olympic Park (Monday), Geelong (Tuesday), Ballarat (Wednesday) and Sandown (Thursday).

“He was a lovely person and always dressed to the elite, and hardly ever missed a meeting. He was also the biggest greyhound breeder in Victoria during the 1950-60s.”

Pearson also came up with a fascinating anecdote about Murphy involving his ‘Irish Catholic’ background.

“When we were young, dad told my older brother Peter and I a story about Frank. Apparently, when he thought a greyhound had no chance in a race, he had a guilty conscience of laying it.

“So, he told a priest during confession, ‘should I be accepting such bets’ to which the priest calmly replied, ‘the other seven could fall over, so it still might win.”

“My memories of dad were of him coming in from the farm mid-afternoon and getting ready to head off to Olympic Park, Sandown or Geelong. On other days, I would find him in front of the TV and video recorder doing the form.

“Being a runner or a bagman was probably the first job that most of his kids had growing up. Helping dad at the races helped pay the bills while at university.

“One of my older brother’s, David, was probably most like dad in terms of knowledge, and knew what he was doing when it came to setting the board and running a book. He ran the show when dad was off on one of his many overseas adventures.

“As a young kid, it was always a great feeling to be invited down to the dogs for the night. As a 10-year-old, my job was to get hot chips and coffee for everyone.

“Sometimes the car rides down and back were just as interesting. Sitting next to people like Colin Dodd, Alan Barker, Peter Bradey, or just someone hitching a lift to the dogs, and listening to the stories was an education. Then we would sometimes meet up with my uncle ‘Tommy’ at Ted’s roadhouse for a bite to eat.

“I hardly ever got the chance to speak with dad between races, as he was always chatting to someone; he was always up for a chat.

“My son, Zack, and I went to The Meadows last Wednesday to watch Race 2 that was named after dad. It was great to catch up with Eddie (Caruana) and some of the other familiar faces. Most people I spoke to refer to dad as a gentleman.

“Dad was always ‘odds-on favourite’ to be the one to lend a helping hand, no matter who you were.”

The Redan Football Netball Club also extended its condolences to the family and friends of Frank Murphy who was a member of Redan’s 1952 Premiership side and reflected on his time with the club back in 2017 in his ‘My Redan Story’.

His funeral service will be held at St Patrick’s Cathedral in Ballarat on Tuesday, December 21 at 10.30am.