Trained by Steve White at Buln Buln East, Paua Of Buddy was backed into $2.80 favouritism and the money was spot on as he clocked a scorching 23.29sec, missing Typhoon Sammy’s 23.28sec record set in the Cup heats by the barest of margins.

In a race of incredible depth, Dr. Tucker (Box 4) at $5 and three-time country cups winner Ferdinand Boy (Box 5) at $6.90 were the other key players.

Paua Of Buddy and veteran outsider Lots Of Chatter ($34), one of two finalists trained by Graeme Jose, were best out of the boxes, with Typhoon Sammy third.

Paua Of Buddy broke clear and powered away from the gallant Lots Of Chatter in the home straight, scoring by 3.5 lengths in an airborne 23.290sec.

It was his eighth win from 11 starts as he just failed to add the Bendigo record to the Warragul 400m benchmark (22.00sec) he established at his run prior to the Cup heats.

“We’ve won a lot of big races, Group 1s, but this is the first country cup we’ve won and we were hoping that we could win it with him.

“This is only his third run against open company. His first was against Qwara Bale (G3 Warragul St. Leger heat) and he ran second and then last week and now this one. He’s got a lot of promise this dog.”

The only disappointing note for White was that his son Mitch wasn’t able to fulfil his normal handling duties with the Cup winner.

“This is for Mitch,” White said.

“Under unforeseen circumstances he couldn’t handle the dog tonight. 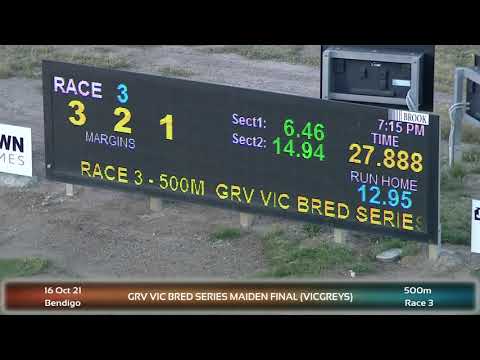 WATCH: The Daryl Brennan-trained Mobile Legend was in a league of his own in the GRV Vic Bred Maiden Final scoring by 5L and snaring a $8,400 first prize. 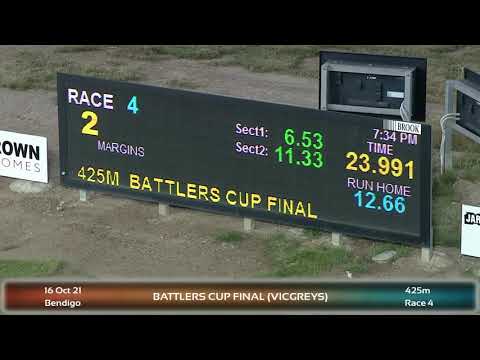 WATCH: The Jordan Formose-trained LEMBUR (B2) proves too classy in the Battler’s Cup, scoring by 4.25L and claiming a $5,000 first prize. 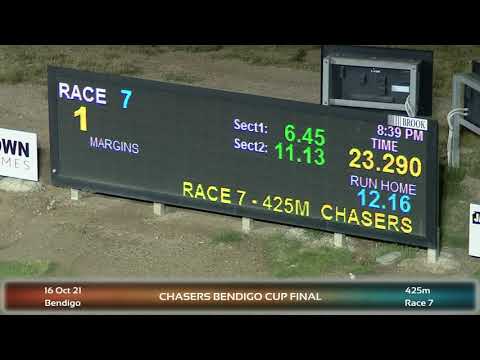 WATCH: PAUA OF BUDDY (B1) was put to the sword early by LOTS OF CHATTER (B8), but he rose to the occasion and powered to within .01sec of the 425m track record clocking 23.29sec. 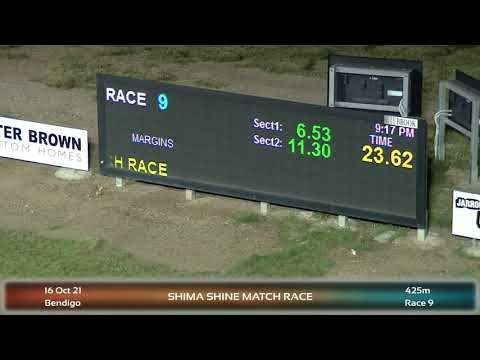 WATCH: KINSON BALE (B1) kicked away to a handy lead in the Cup Night Match Race, but MUSIC EVENT (B3) cut to the rail and found another gear when it counted, scoring in 23.61sec.

“He adores the dog and for him not to be able to handle the dog tonight nearly brought me to tears. It’s a shame he couldn’t be inside the track with me and this is for him.”

White has been open in explaining that Paua Of Buddy’s fanatical chasing desire and will-to-win takes a great toll and has at times become problematic.

“We’ll just play it by ear with him,” said White.

“We have had a few issues because he absolutely busts himself and he’s down for about 48 hours after his races.

“We know what we need to do to manage it now but the whole thing about this dog is when we open the kennel door tomorrow morning and see how he is.”

The first feature on Cup night was the Vic Bred Maiden final (500m), which was a one-act affair as $1.90 favourite Mobile Legend, another son of Aston Dee Bee, trained by Daryl Brennan, backed up a fast 27.86sec heat win when careering away in 27.89sec, his second win from three starts.

Another highlight was strike rate sensation Bareki, trained locally by Dallas Massina, claiming her sixth straight win since resuming from a spell, improving her overall record to 16 from 23 with a come-from-behind 27.96sec success.