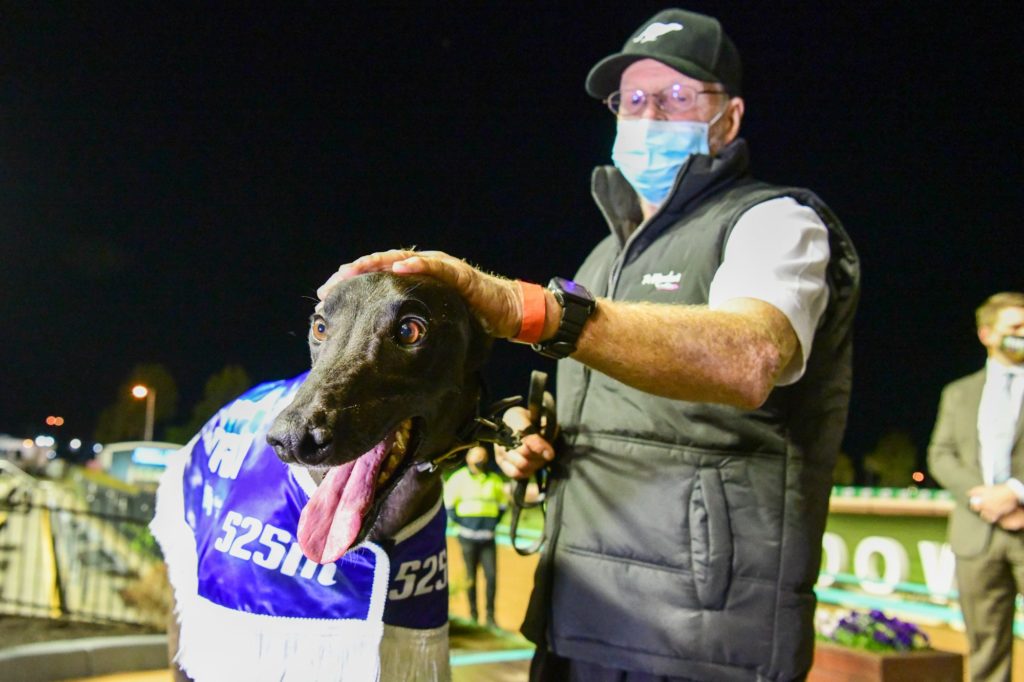 Co-trainer Tom Dailly has declared superstar Shima Shine “as good as gold” ahead of his quest for a second Albion Park G1 victory in Thursday night’s Brisbane Cup heats (520m).

Shima Shine is TAB’s $1.90 favourite from box seven in the second of five heats, while he shares ‘All In’ favouritism at $5 with fellow Victorian Tiggerlong Tonk and rising NSW star Jungle Deuce.

After winning the inaugural Pink Diamond Champion Sprinter final (500m) at Bendigo on June 18, Shima Shine is venturing to Queensland for the second time in 2021, with the Topgun hero having claimed the second G1 trophy of his career in the Gold Bullion in February.

The son of Barcia Bale and Shima Song was sensational in winning heat and final of the Gold Bullion, clocking 29.62sec and a near-record 29.51sec respectively.

With Tom Dailly saying the 13-day gap between runs is ideal, Shima Shine is primed to make it three from three in the Sunshine State.

“It’s an ideal preparation because he’s a dog that always puts in 100 per cent every time he goes around and that can knock him around a bit,” he said.

“He races best with a bit of space between his runs so it’s worked out well.

“He likes it up in Brisbane and I don’t think the box matters. He just needs a clear run and if he gets a bit of room to move he should be hard to beat.

“I’m expecting him to run an extremely good race. He better win!”

‘Team Dailly’ has a high-class ‘second string’ to its Brisbane Cup bow; although that tag isn’t doing justice to the talents of Victoria’s sprinting ‘Queen’ Qwara Bale, winner of the G1 Sapphire Crown and G2 Warrnambool Cup over the past two months.

Qwara Bale has won seven of her last nine starts, with both defeats interestingly coming at Albion Park.

She ran second to another Victorian Brisbane Cup contender in Equalizer in last Thursday’s Listed Super Sprinters, while she previously finished third in a heat of the G2 Flying Amy.

Drawn in box three in heat four, Qwara Bale is the $3.50 second elect behind locally-trained favourite Orchestrate at $2.70, with Dailly predicting an improved showing.

“She’s only young and hasn’t had much experience with the flying and travelling and that was the main reason we sent her up last week,” he explained.

“It was another good experience for her.

“Equalizer had the race won in the back straight last week because he’s as strong as a bull but Qwara Bale did stop a bit quicker than I expected.

“But with more experience travelling and another look at the track I expect her to be better this week.”

Victorians dominate the pointy end of TAB’s ‘All In’ market, with Shima Shine and Tiggerlong Tonk joint favourites, followed by Equalizer and Qwara Bale at $8, Do It at $12, Aston Fastnet and Music Event both $15 and Yozo Bale at $31.