The last time Anakie’s ‘Team Grenfell’ had three runners in a final – they trifectaed the race!

And they’ll be hoping lightning strikes twice in the ‘same place’. Well, not exactly.

In last week’s heats, rising star Nikoli Bale took the challenge right up to flying femme Immunity who scored in a slick 30.05sec (Best). Nikoli Bale went to the front through the first corner and led well into the home straight before being overpowered by 1.6L.

Grenfell is also bullish about Xavien Bale, who finished second to Hill Top Jack in the second fastest heat (30.07sec) – albeit beaten by 6.4L.

“He’s a speed dog… He’s as quick as the ‘red’ (Nikoli Bale) but not as strong. However, it wouldn’t surprise me if he won the final.”

And Grenfell is equally buoyant on Usman Bale’s chances. He won his heat in 30.25sec.

“He’s the fastest pup we’ve had through pre-training – even ahead of Orson Allen and Tiggerlong Tonk. In fact, he was four lengths quicker than Orson Allen at the ‘educational’ stage.

“He hasn’t worked it out yet, but the penny has started to drop… He’s got the potential but has to learn to do it.”

“Knick’s Bale is well drawn, and Kinson Bale is a very fast pup. However, his box manners let him down. He can come out one length in front or three lengths behind.”

All five greyhounds are trained by Grenfell’s wife, Samantha, and he was quick to pay tribute.

“Without Samantha, there’s no greyhound racing operation. She’s the backbone of it all.

“Samantha does all the hard work while I’m out racing, and that includes caring for our four kids – Xavier, 8, Ollie, 4, and 16-month-old twins Ava and Gracie.” 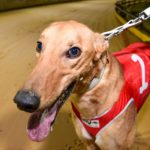