On a cold, wintry night – and under latest COVID lockdown – the best, and only, place was at home in your favourite armchair to watch tonight’s Trio’s Winter Cup heats (520m) at Cranbourne.

And given Melbourne’s coronavirus environment, sprint siren Immunity loomed as the omen.

Well, the script went according to plan with the Jason Thompson-trained flying femme showing plenty of ‘resilience’ in Heat 4.

Immunity, who was a G2 Laurels finalist late last year, has returned in stylish fashion since a seasonal spell.

But she won’t receive any ‘protection’ in next week’s $20,535 to-the-winner final after the David Geall-trained Hill Top Jack won Heat 1 in a slick 30.07sec.

He’s a litter brother of Koblenz, who has won his past seven starts, and a ‘cousin’ of dual G2 country cups winner Ferdinand Boy, who is favourite to win the inaugural $25,000 to-the-winner ‘The Horizon’ at Sale on Sunday night. All three are trained by Geall.

Grenfell has Nikoli Bale and litter brothers Xavien Bale and Usman Bale in the final. The latter two were second and third respectively to kennelmate and ‘country cups king’ Yozo Bale in the recent Listed Graeme Hull Memorial, formerly known as the Wagga Gold Cup.

Trained by Ben Joske, Persian Goddess – the medium of solid support – registered her ninth win from 18 starts, including three of her last five.

HEAT 1: Hill Top Jack (6) swept around the leaders on his way to a comfortable win over Xavien Bale (3).

HEAT 2: Usman Bale (8) makes it four win from his past seven starts when proving too strong for Mepunga Reject (1) in 30.25sec.

HEAT 3: Recent G1 #SapphireCrown finalist Persian Goddess (6) continued her rise to prominence with a brilliant all-the-way win over Plan Ahead (5) in 30.19sec.

HEAT 4: Immunity (8) timed her run to perfection, pipping Nikoli Bale (1) in the dying stages while Kuro Kismet (7) had to settle for third in a flying 30.05sec. 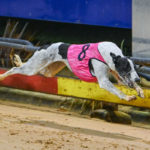 Immunity was airborne - literally - clocking 30.05sec, the fastest of the four heats. Immunity with trainer Jason Thompson after maing it 4 from 4 out of the pink alley. Usman Bale made it four wins from his past seven starts for the Grenfell kennel.
Photos by Clint Anderson