Thursday, 8 May, 2014, by Greyhound Racing Victoria

Leprechaun Miss was one of four new inductees into GRV’s Hall of Fame earlier this year. This is her story…

FROM UNWANTED PUPPY
TO GRV’S HALL OF FAME

Leprechaun Miss (1995 Shining Chariot – National Dingaan) is just the fourth greyhound to be inducted into GRV’s Hall of Fame for her achievements as a broodmatron.

Despite being unwanted as a pup, her influence on Australian greyhound breeding is almost incomparable when you weigh up the calibre of greyhounds she and her daughters have produced, plus the fact that at least 10 stud dogs can be traced back to her.

Leprechaun Miss transformed the lives of Little River couple Paul and Diane Bartolo, who went from being greyhound racing “battlers” to the envy of virtually every greyhound breeder in the country.

However, to say that it almost never happened is an understatement, Bartolo reveals.

“I always wanted a pup from the National Lass line – which was a great line in NSW – and these pups were granddaughters of National Lass.”

“A mate (the late Ray Bell) and I bought four of them for $2,000 each – which was big money back then – sight unseen. I wanted to drive to NSW to look at them first but Ray had already arranged with the breeder (Richie Dean) to have them transported to us.”

“They arrived and three of them looked fantastic, while the other one (Leprechaun Miss) was the ugliest pup I have ever seen.”

“When she arrived at my place from NSW I took one look at her and called the breeder straight away to try to get my money back, but he said no” – PAUL BARTOLO

“She was the runt of the litter and was undershot, so I got on the phone to Richie straight away and told him I was going to send her back to him and that I wanted my money back.”

“He said no, so Ray and I tossed a coin as to who would keep her, because we were having two each from the litter.”

“I lost the toss, and was so convinced that she wouldn’t be any good that instead of keeping her myself I gave her to (wife) Diane as a present,” he laughed.
Despite her unattractive appearance, Leprechaun Miss showed enormous promise as a pup and at 18 months of age, while in training for her debut, she came on season.

“I was really keen to breed with her despite the fact she was so young. The top sire at the time was Head Honcho, so I called (studmaster) Phil Pryor who fortunately was able to fit her into his schedule,” Bartolo said.

After having her first litter Leprechaun Miss was put back into work, and when the pups were about four months old she was sent to a trainer in WA to start her racing career.

“She was with a trainer over there being prepared for a rich maiden series, and despite her obvious talent she just wasn’t interested in racing against other dogs.”

“So she came back to me to train without having a start in a real race over there. She only had one actual start, which was with me at Geelong when she returned from Perth, and she ran fifth in a performance that was well below par.” 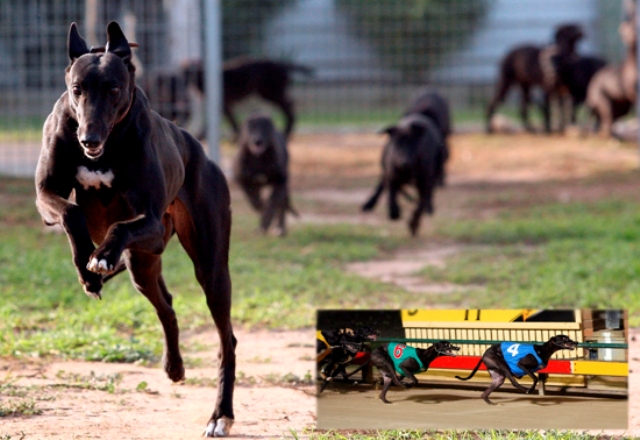 Leprechaun Miss’ first litter is regarded as one of the best of all time, producing metropolitan track record breakers Clearwater Boy (The Meadows 518m) and Lynishia Star (The Meadows 600m) as well as top class greyhounds Jones Junior, Kenny and Royal Assassin.

Jones Junior, arguably the quickest in the litter, was retired prematurely to stud, and perhaps his greatest legacy was that he produced Chloe Jones, who was the dam of elite sprinters Trewly Special, Go Forever, Trew Millions and Two Up Larry, who all became sires themselves.

Leprechaun Miss had a return mating to Head Honcho, as well as litters to Hotshot, Carlisle Jack and November Fury.

“She threw a lot of handy greyhounds and a number of city winners from her other litters, but her first litter was her best by miles,” Bartolo said.

Leprechaun Yap (Hotshot-Leprechaun Miss) became a champion broodmatron in her own right, winning the Victorian Broodmatron of the Year in 2006 and 2007.

Betty’s Angel and Miss Mini Mouse filled the Quinella in the 2006 Group 1 Melbourne Cup, while Leprechaun Pace won the Group 1 Paws Of Thunder in Sydney.

Some of the other top class greyhounds and or stud dogs that trace back to Leprechaun Miss include Birthday Boy, Borat, Glamorous, Smack Wallop, Hawk Alone, Katie Merry, Oaks Road, Premier Boloney and Magic Sprite (sire of Black Magic Opal).

“I’ve lost track of all the great dogs that have come from the line. It just keeps on producing,” Bartolo said.

Leprechaun Miss joins Wee Sal, Floodgate and Sydney Gem as the only greyhounds to be inducted into GRV’s Hall of Fame because of their achievements as broodmatrons. Trewly Special is one of at least 10 male greyhounds that trace back to Leprechaun Miss who have gone to stud.