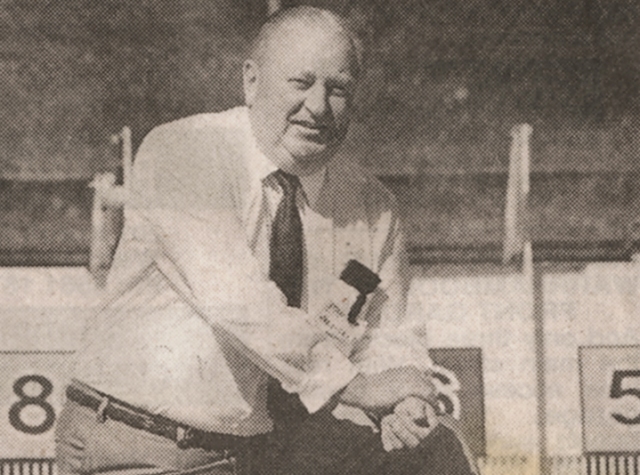 However, Lake was thoughtful and earnest on matters involving the club in which he gave more than half a century of loyal and dedicated service.

But it was as an eight year old that he began ‘learning the greyhound trade’ from his brother Bill and “Skeeta” Whitten who were both local trainers.

In the early 1940s, Lake saw active duty for a couple of years with the transport division of the nation’s armed forces in Darwin. But his return from the war precipitated an amazing chapter in greyhound administration – 52 years on the Warrnambool GRC committee (1946-98), including 13 years as president.

“He was everybody’s friend, and treated people as equals. He didn’t hold any grudges,” said his daughter, Maureen Drennan, who was Warrnambool GRC manager from 1987 until 2005.” He was always happy, and had funny little sayings.” Maureen remembers as a kid playing ‘British Bulldog’ between races at the club.

“We all loved the greyhounds, including my mum (Connie) and two younger brothers (Ian and Ronald). We basically ‘grew up’ at Botanic Park.”

A life member of the Warrnambool GRC, Lake led deputations for club grants, with construction of the Wannon Room in 1990 a testament to his negotiation skills. He also assisted with office duties on race nights, conducted trials, ran the club bingo and organised working bees. “Effectively, he was the Warrnambool GRC. He turned his hand to everything in times when the club was struggling,” Maureen said.

“And while I was club manager, he was a tremendous help in the office – particularly with the organisation of the Warrnambool Classic.” It has been said Lake had performed every role at the club except lure driver. He worked such long hours for the club his wife was quoted as saying “you might as well take the bed with you”.

He and his wife also owned and operated Lakes Jewellers in Warrnambool for 35 years, retiring in 1993. The 1996 Victorian Greyhound Racing Control Board (GRCB) Achiever of the Year, Lake was also a dab hand as a trainer. He won three Warrnambool Cups with Indian Fighter, who was also a coursing champion in the early 1960s. “Dad owned Indian Fighter’s dam, and he bred the litter in the backyard at home,” Maureen said. “Indian Fighter was reared in open paddocks on a farm and was as fit as a fiddle when returned to dad. He won his first race at 13 months of age at Botanic Park.”

The jovial Lake was also a staunch family man and the life of any party. “He always supported his family, and was generally a fun person that everybody liked being around,” Maureen said. Maureen added her father’s induction into the Victorian greyhound racing Hall of Fame was “a tremendous honour and the icing on the cake”. “He’d be just so proud; I’m sure he’s up there watching.” Stan Lake – who posthumously received a 2000 Australian Sports Medal – passed away on July 1, 2000, aged 76.