Young trainer Kristie Collyer says winning the Waterloo Cup – the pinnacle of the coursing season – this Sunday at Longwood would be even more special the second time around.

Collyer, 34, claimed the time-honoured Waterloo Cup in 2009 with Voodoo Oak and she and brother Steven, 30, have home-bred litter sisters Kasemi and Uncle’s Girl among the final eight chasing this year’s crown.

With a change in format to consecutive Sundays rather than the previous Saturday-Sunday ‘back-up’, Day 1 of the Waterloo Cup was held last Sunday.

A full card of 64 entrants was reduced to the eight quarter-finalists, two of which are owned, trained and bred by the Collyer family at Coburg North.

Kristie is a third-generation trainer, with experience working for some of the biggest names in the game, and courtesy of her father, Murray (pictured above), she’s well-versed in the art of coursing.

While winning the Waterloo Cup is an undoubted highlight of Kristie’s training career thus far, she deflects the credit for Voodoo Oak’s triumph to her dad, as she was battling ill-health at the time.

“I was diagnosed with lupus 13 years ago and was pretty unwell. I was actually on death’s door with my kidneys shutting down,” Collyer explained.

“So dad did everything with Voodoo Oak when she won the Waterloo Cup and he can claim all the credit for that win.

“It would be awesome to win it again on Sunday, especially because Kasemi and Uncle’s Girl are from the first and only litter I’ve ever bred and I’ve done everything with them – reared them, broke them in, the whole lot! Murray Collyer, father of Steve and Kristie, with a team of greyhounds on Waterloo Cup heat day. 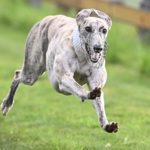 “My brother (Steven) and I co-train, which is pretty cool, and dad’s here with us too. Dad loves coursing, he’s a religious coursing man!”

It was while working for Robert Britton and campaigning in Western Australia with Britton’s feature race contenders that Kristie took a shine to West On Xandi, the mother of her two Waterloo Cup contenders.

“I was staying with Linda Britton and fell in love with West On Xandi and her sister Showtime Mystery,” Collyer recalled.

“I brought them back over to Victoria and trained them here and then after their racing careers finished I asked Linda if I could keep them and she said ‘Of course!’

“West On Xandi’s litter to Unlawful Entry have all won their Maidens and been pretty successful.”

Kasemi has won six of her 28 racetrack starts, including four wins at The Meadows with a smart 30.02sec personal best, Uncle’s Girl’s three wins have all come at The Meadows, while the litter also features West On Aries (six from 33) and Jachar (five from 28), among others.

“The ‘kids’ had been getting knocked around a bit in their races and had lost some confidence, so we decided to try something different and give them a go at coursing and it’s worked out really well,” Collyer said.

“Kasemi went to Lang Lang and won the Gippsland Cup and then Uncle’s Girl won the Gary Brett Memorial at Longwood, which was great because we were very good mates with Gary, who passed away earlier in the year.

“I really like the way Uncle’s Girl is coursing but in saying that I’m also very happy with Kasemi and I’m really looking forward to Sunday.”

Kristie described the Waterloo Cup’s attractive winner’s purse of $12,970 as a “nice bonus!”