After taking ten attempts to claim a breakthrough Group 1 victory in the Perth Cup, Victorian superstar Tiggerlong Tonk has captured his second in the space of a month, edging out Catch The Thief in a thrilling Harrison-Dawson Final (515m) at Sandown Park.

It’s the second time in three years that young Anakie trainer Correy Grenfell, 27, has completed the Perth Cup/Harrison-Dawson double, after his 2018/19 Australian Greyhound of the Year Orson Allen also won both races in 2019.

Remarkably, it’s the third year running the winner of the Perth Cup has returned to Victoria to claim the Harrison-Dawson, with ill-fated champion Simon Told Helen achieving the feat last year.

Having feared Tiggerlong Tonk may retire without a Group 1 success on his resume, Grenfell said he felt relief after seeing his prolific son of 2015 Melbourne Cup hero Dyna Double One and Tiggerlong Dot go bang, bang in quick succession.

“Orson Allen did exactly the same double and to do it again means the world,” said a delighted Grenfell.

“We’re obviously doing something right so we’ll keep doing it!”

After running third in 2020, Tiggerlong Tonk earned a second crack at the Harrison-Dawson with a scorching 29.10sec heat victory, which was bettered only by champion Shima Shine’s airborne 29.00sec.

While Tiggerlong Tonk’s run of unsuitable draws in G1 finals continued when he was allocated box eight for Thursday night’s final, he was the $3.60 second elect, with Shima Shine the $2.60 favourite from two.

Catch The Thief ($10.20) held out expected leader Fernando Bluey ($8.20) in the run to the first turn, as Tiggerlong Tonk moved across into second, while Shima Shine blew the start and was never a factor.

From that point Catch The Thief and Tiggerlong Tonk staged a memorable two-greyhound duel, with Tiggerlong Tonk driving clear in the final bounds to score by 1.37 lengths in 29.23sec.

It was his 39th victory from 79 starts and 12th win from 27 appearances at Sandown.

“That was just a good contest between him and Catch The Thief. He had to bring his best to win and he did,” said Grenfell.

“He was always going to dig deep and keep coming. He’s got a great will to win.”

The $100,000 winner’s purse elevated Tiggerlong Tonk’s prizemoney total to $676,015 and with five minor placings at G1 level that figure could have been significantly higher.

But there’s every chance he’ll be adding to his tally, with Grenfell saying a stud career will have to wait.

“At this stage we’d be silly to retire him. He’s flying. He’s going as good as he was when he was 18 months old and he’ll tell us when it’s time.”

Tiggerlong Tonk is owned and bred by Michael Finn at Wagga Wagga in NSW and that’s where Grenfell and wife Samantha are eyeing off their next feature celebration, boasting four runners in Friday night’s Graeme Hull Memorial Final.

The RSN Sandown Cup Final will be held next Thursday night, with the box draw to be conducted on Saturday morning live on RSN.

WATCH: TIGGERLONG TONK (8) was all heart when reeling in CATCH THE THIEF (5) in a cracking edition of the $145K G1 #HarrisonDawson at @SandownDogs in 29.23sec. 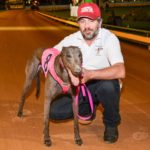 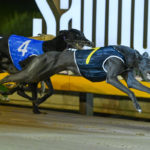