The late Neville Vincent may never have trained a champion but son Steve has spoken proudly of his father’s “uncanny knack” of always having a good one in the kennel.

“Dad never had a champion or a Group winner but he always had a good dog. Always,” said Steve.

“At Dad’s funeral and wake there were a lot of greyhound stories told. There was a big turn-out of past and present greyhound racing royalty – the Daillys, Paul Bartolo, his son Ray and Chris Stanton.

“Jimmy Fowler was probably his closest friend in greyhounds. He also had a lot to do with Jimmy and Maureen Turner and Kev Ward. Dad always acknowledged Rose Booth as being the catalyst for his involvement in greyhound racing.”

As is so often the case, Neville, who lived at Lal Lal, near Ballarat, and recently passed away at 70 years of age, shared his greyhound racing passion with wife Sandy, daughter Michelle, who was extremely involved, son Steve and Steve’s children Zac and Bella.

“It was a real family thing,” Steve said.

“During my youth I lived at greyhound tracks. I was obsessed with greyhound racing and I wouldn’t change a thing. I don’t think I’d have a mate that hasn’t had shares in a dog.

“When I was younger I remember getting woken up at 6am every Sunday to go trialling at Geelong, hungover after getting home at 3am. It was shocking!

“The last dog Dad had, called O’Sullivan, was probably one of the fastest he ever had but he had heaps of trouble with him.

“He ran 29.19sec at Sandown but after trialling there in 29.24s late last year he ended up at the vet and didn’t make it.

“Dad gave me and my two kids a 10 per cent share in O’Sullivan, so it was extra special.”

Steve fondly recalls spending countless hours with Neville discussing the best and fastest dogs his father trained over the years, rating Oodles Rocks, a six-time Group finalist, and Exclusion, which won 33 races, as two of the best. 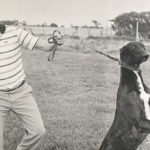 Big Ernie Oodles, which won 16 of his 100 starts, also gained an honourable mention.

“Big Ernie Oodles was owned by me and my mates,” Steve explained.

“He made the (G1) Maturity Final but was up against Brett Lee at his peak, which was unfortunate timing. I think Brett Lee was five in front on the first turn!

“Dad also had Big Ernie Oodles’ mother, Oodles. She was only 22 kilos – she was like a runt – but she won five in town.

“Oodles’ brother was a dog called Lindrum and he was a dog a lot of people would have associated Dad with early on. He had 181 starts and picked up 51 cheques in town. He used to storm home but wasn’t too keen on winning. Dad said he was a dog that should’ve bought us a house!”

“She won five races and was well-bred so we bred a litter with her. She had 11 pups; we sold two and kept nine and all nine won races so we were hooked.

“Nev used to train all my dogs for a long time until I eventually ended up with too many and got my own trainers license.

“Nev trained the Greyhound of the Year at a number of tracks for me. Bellarine Bob won GOTY at Horsham and Exclusion won the GOTY at Ballarat and Warrnambool the same year.

“The only Group winner I’ve had is Go Wild Jack. Nev originally trained him for me and he won seven of his first 16 starts but then Nev cracked it with him one night and told me to take him home. That’s how Nev was! Go Wild Jack went on to win the Ballarat Cup and made five or six Group finals. Sometimes a change of kennel works with them.

“Nev was a great mentor to me. He taught me a hell of a lot and was a real straight shooter. If he thought you were doing something wrong he would be the first to tell you!

“The big thing with Nev was that he really loved his dogs. They were like his kids.”