GRV Board member and Richmond Football Club director Emmett Dunne will be awarded life membership at the AFL season launch in March.

He will be honoured under the AFL’s ‘special services’ banner.

Prior to joining the GRV Board, Mr Dunne served as a police officer for almost 40 years before retiring in 2015.

Emmett also served as the Chair of the Australian New Zealand Policing Advisory Agency Integrity Forum, and was awarded the Australia Police Medal in 2011 for his significant service including his contribution and involvement in the force’s Operational Safety and Tactics Training.

Emmett was appointed to the GRV Board in September 2016 where he and the board have overseen comprehensive reform and significant growth in the code. 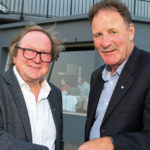