Were there some supernatural shenanigans at play at Warragul on Tuesday night?

The late Simon Benson would have been smiling from the heavens as Dr. Abbie took out the race named in his honour after a win appeared out of her reach.

Steve White, manager of Paua Kennels where Simon worked as ‘pro catcher’, suggested pre-race that “Simon would be cheering for (trainer) Billy McMahon and his greyhound Dr. Abbie” in the Simon Benson Memorial (460m).

Sure enough, Dr. Abbie took out the event in uncanny circumstances at the huge odds of $10.20 from box two.

“Simon gets his wish,” White quipped after the race. “It’s quite funny because although Dr. Abbie led early, once she surrendered the lead she was never going to win.

“The three took the four off the track and it was as if Dr. Abbie was meant to win the race. I think someone was looking down from above.”

“However, the three ($2.10Fav Immediate) took the four (Double Tax) off the track and it was as if Dr. Abbie was meant to win the race. I think someone was looking down from above.”

Dr. Abbie (KC And All – Dr. Willow) collected a $5,000 first prize after winning by four lengths in 25.88sec, with Zanthre Allen and Whip Allen filling the minor placings.

The Simon Benson Memorial is open to greyhounds with 1-4 wins, with Dr. Abbie notching her fourth career victory to go with 18 minor placings from 30 starts.

Simon passed away as a result of a heart attack in 2016 at just 30 years of age, two months after he endured a serious leg injury in a bike accident.

He was a member of the Warragul GRC and was renowned for always being happy and telling wild stories.

Image above: Dr. Abbie and trainer Bill McMahon with Steve White (standing left) and members of the Benson family after Tuesday’s final.


WATCH: Dr. Abbie (2) wins the 2018 Simon Benson Memorial after all seemed lost, but was the race influenced by Simon himself? You decide… 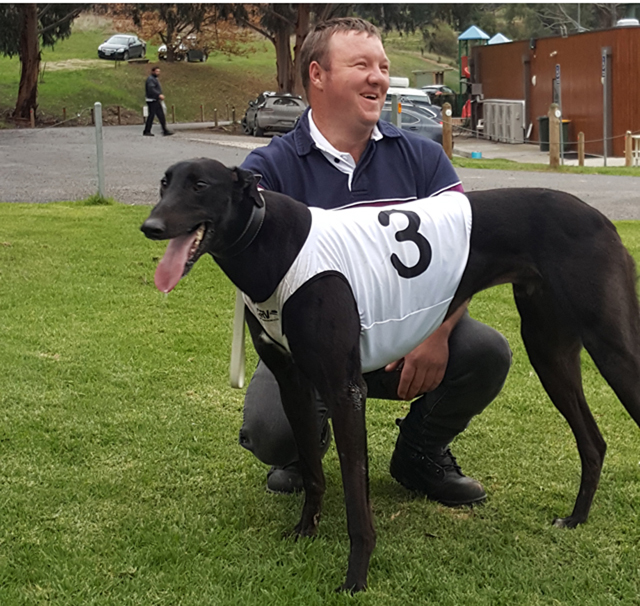 Simon Benson made a huge impression during his short time in greyhound racing.