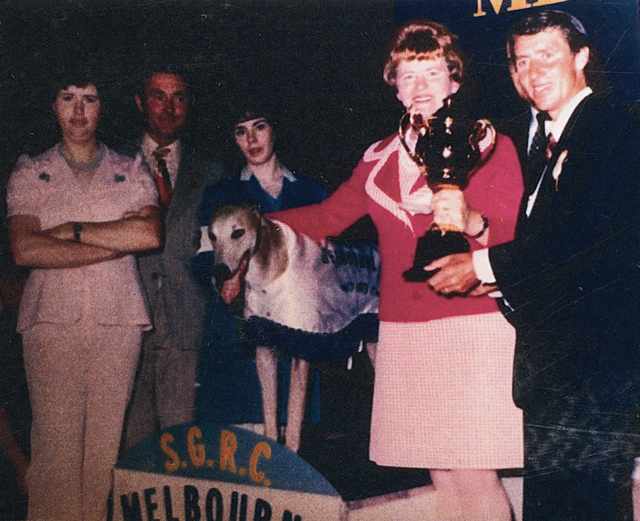 Paul Hogan is regarded as one of the greatest greyhound breeders of all-time. The Hogan breed – Dinah Jet, Fairbairn Lady, Fairbairn Queen, Cheltenham Lass and Delbairn Babe – was one of the sport’s strongest dam lines in the 1960s and 1970s. He was also Victoria’s first public trainer, operating Cheltenham Park for leviathan bookmaker Lal Scurrah.

Hogan’s daughter, Sandra Reed of Drouin, recalls her father’s introduction to greyhound racing. “I was only eight years old at the time and we were living in Bentleigh. Dad was a truck driver for Tarax, and he was also housing some greyhounds with his parents (Bill and Kyra) at nearby McKinnon. “Dad came from a racing family. His father (Bill), a jockey, and his mother (Kyra) were big-time gamblers in those days. “Their life revolved around all three codes – that was their entertainment.”

Hogan was 16 when he purchased his first greyhound. “At the end of the war he was working as a baker. He was delivering bread and milk from a horse and cart, and was caddying at Huntingdale Golf Club,” Sandra said. “His father had said there was “no future” in greyhounds. Fortunately he didn’t listen. The leading sire at the time was Groongal, so he bought the Sporting Globe and rode 18 miles to Mitcham to inspect some pups. He bought two – Brymac, who won five of its first 10 starts, and Nola Gro.” “He was offered a lot of money in the mid-1950s for Red Fred, but he refused and soon after it died of distemper. Mum (Hogan’s wife Nola) was livid with him as they were battling to make ends meet.”

Hogan’s big break was an introduction to Ken Burgess, and he obtained a half-share in Dinah Jet, who was to become a prolific producing brood matron. Burgess also commissioned Hogan to train her progeny. Her first litter comprised 10 pups and all were invitation class, including Fairbairn Queen (dam of Cheltenham Lass) and Take A Bow, who was to become a champion sire.

After Hogan’s mother passed away, aged 57, Nola started helping out at Cheltenham Park – caring for the brood bitches and pups. “Mum said she always wanted to be a nurse. She had a kind nature and great socialisation skills with the pups,” Sandra said.

Hogan’s breeding philosophy was that the brood matron was more imperative than the sire, and that the stud dog should hail from a strong dam line. “He was one of the first breeders to use Black Top, Pied Rebel and Delacombe Boy who all became top sires,” Sandra said. “He believed care of the brood matron was of utmost importance in breeding, and that they needed to be regularly exercised.”

Hogan always maintained that his greatest training achievement was winning a Hobart Thousand with Fairbairn Lady and that the best greyhound he trained was Cheltenham Lass, owned by Scurrah’s wife Jean. He had a break from the sport domestically in the mid-1970s, travelling overseas and analysing breeding/training methods in Ireland and the US. He also rationalised his breeding operation but retained dams Delbairn Babe and Nikki Bairn. Hogan had the faith to follow the one line right through and have it continually produce top greyhounds.

He moved to Tynong in 1967 and developed “Pine Winds”, a 40-acre breeding/training complex.”His pups were let out into a 30-acre paddock to free gallop. Nancy Fairbairn, who won 32 races, helped him through the establishment phase at Tynong,” Sandra said.

Hogan was also a director at Sandown Greyhound Racing Club for 30 years. “He loved Sandown. He was happy to see Sandown succeed as it did,” Sandra said. “He was a very sociable person, and appreciated other people’s points of view. He was also a perfectionist – always planning and researching.” “Dad was a product of the pacemaker days. He didn’t want the strugglers to be left behind,” Sandra said.

“He was a ‘working class man”. He never forgot his humble beginnings, and thought that’s what the sport was all about. “It’s great dad has been recognised for his contribution to greyhound racing as he helped lift the image of the sport. “We’re very proud and honoured that he’s been inducted into the Victorian greyhound racing Hall of Fame.”