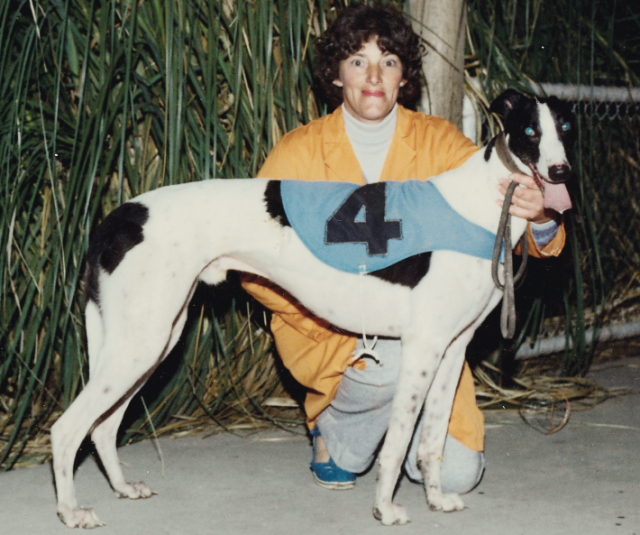 Margaret Thomas is considered one of greyhound racing’s ‘first ladies’. Her tireless devotion and commitment has encompassed the entire gamut of the sport. Margaret, who served the Traralgon Greyhound Racing Club with distinction for 10 years, received the 2004 Ken Carr Medal – the highest award for excellence within the Victorian greyhound racing industry.

She trained a champion greyhound in the mid-1970s, and has hand-made presentation rugs for several race clubs for the past 35 years. Margaret also played a pivotal role in one of the sport’s greatest PR exercises – Dalkeith – which hit the silver screen. But Margaret’s life in greyhound racing really has its genesis in the late 1930s.

Here she tells her own story. “I was born and bred into greyhound racing. I had a collar and lead in my hand from the time I could walk,” Margaret said. “I was my father’s (Arch Franklin) little ‘dog keeper’. He gave me a gift of loving the sport. “From aged four, I would ‘create’ a toothache, just to go to the White City dogs with dad. “And when I was around 10 years old, I would go coursing hares with dad, Ron Gooding and Jim Sparks in the paddocks along Greens Road, Dandenong.“Not long after, dad was called up to the air force where he served in Papua New Guinea during World War II.”  He left behind a 12-month-old pup and I used to walk her along the banks of the Dandenong Creek. I thought he would only be away a couple of weeks, but he was gone four years.

“While he was away, my mother would iron clothes to make money and earned 650 pounds. On his return from the war he took those savings to Gracedale Park and lost every penny, and all my mother would say is, ‘but he’s home’. “Then, in 1972, I met a man called Graeme Thomas and we moved to Meeniyan. He bought me my first two greyhounds – Nigger Chimes and Charlie Chimes.”  They were bought for $100 from Nugget Charles as three-month-old pups. Cattle prices were low and the two dogs were our salvation.

“Nigger Chimes was my first winner. He won the 1975 Silver Chief, at only 17 months of age, and all of my family was there. But my most exhilarating moment as a trainer was when Meeniyan Prince defeated Eaglehawk Star in a heat of a Melbourne Cup. He later went to stud in Ireland and some of his pups also raced in America.”

Margaret said her time on the Traralgon GRC committee (six years as President and three years as Vice-President) was “one of the greatest eras of my life”. “The club was looking down the barrel and there was not a lot of direction being taken. I said “if we all do more than our share, we can turn the club around.”

The film Dalkeith – featuring a greyhound racing for a Traralgon-based aged care facility – generated significant media coverage in Melbourne. “It all started when the late Mark Hardy, a trainer who suffered from a chronic asthmatic condition, suggested giving a greyhound to an elderly group as a form of ‘wonderful therapy’,” Margaret said. “I provided the greyhound, named “Willis”, to the Dalkeith nursing hostel and he was trained by Ray Cunneen. Many of the Dalkeith residents would come to the track in wheelchairs and frames – it was wonderful. A film was made after a producer watched a segment on Dalkeith on A Current Affair.

During the past 35 years, Margaret has hand-made presentation rugs for Sandown Park, The Meadows, Cranbourne, Traralgon, Warragul, and the National Championships. “It’s not always the trophy, owners and trainers are entitled to something a little extra than prizemoney,” Margaret said.

Margaret said she “never had a clue” about the 2004 Ken Carr Medal until GRV CEO John Stephens started talking about ‘sponge cakes’ – a regular treat she provided at Traralgon GRC meetings. “We all travelled up to Melbourne in a mini-bus for the function. Receiving the Ken Carr Medal was a real honour.”  And I feel extremely humble to be inducted into the Victorian greyhound racing Hall of Fame, I’m so thrilled.”