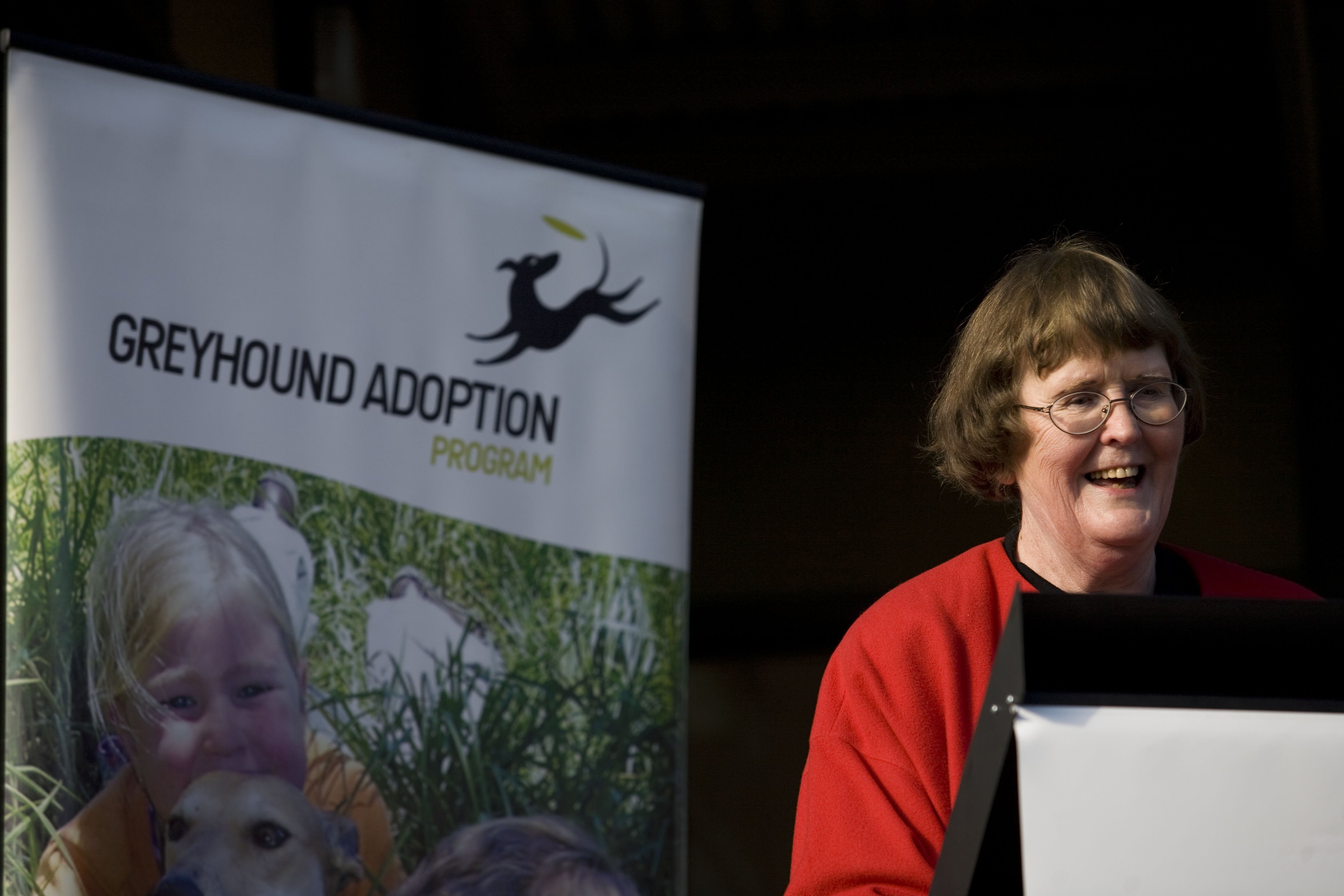 The late Jan Wilson has been inducted into Greyhound Racing Victoria’s Hall of Fame, in recognition of her extraordinary achievements as an administrator of the sport, and in particular her role as GRV Chairman for a decade until her sudden passing in 2010 at age 70.

Born Janet Barnett in Falkirk, Scotland, she was in her early 20s when she arrived in Australia on a working holiday with two friends, intending to stay for six months. However, Jan got a transfer in her job with Union Carbide and ended up living in Australia for almost 50 years.

Prior to her involvement in greyhound racing, Jan enjoyed a long career in politics. She married Eric Wilson, and together they were attracted to the ALP as Gough Whitlam began transforming Labor. Her contributions during her political career and beyond retirement benefited many, including elderly and migrant residents of the City of Dandenong.

Jan joined the Board of Greyhound Racing Victoria in 1998 and the following year she became Chairman. At that time, eight of the twelve Victorian provincial clubs had little or no Sky Channel coverage, while infrastructure and overall facilities were moderate.

A decade down the track with Jan as GRV Chairman and nearly all greyhound meetings had Sky Channel coverage, GRV’s market share of the wagering dollar across the three racing codes had grown from about 12 per cent to more than 17 per cent, while prizemoney had increased from $11 million to almost $25 million a year.

In addition, GRV’s overall infrastructure at its clubs was drastically improved under Jan’s leadership, with the redevelopment of a number of race tracks and facilities, and the purchase of the Greyhound Adoption Program’s property in Seymour, which has been a pillar in the program’s re-homing of more than 7,000 former racing greyhounds as pets.

Close friend Marg Long, a GRV Hall of Fame inductee and long-time greyhound racing administrator at club level, said Jan’s foresight with regard to the Greyhound Adoption Program, which saw the program move from GRV’s offices at William Street in West Melbourne to its 40 acre property in Seymour, was integral in terms of securing the long-term future of greyhound racing.

“Jan wanted to see a future for greyhound racing and a future for retired greyhounds. She fought very hard to ensure we could purchase the GAP property and progress from there,” Long said.

“She was kind and generous and a beautiful person, and she was certainly a pioneer for the greyhound racing industry.”

While Jan didn’t officially become involved in the administration of greyhound racing until she joined GRV’s Board in 1998, she did have an interest in racing prior to this.

“Jan and her husband Eric owned race horses back in the seventies and eighties,” recalled GRV’s Robert Shaw. “Her interest in greyhound racing came from her involvement with the Sandown Greyhound Racing Club back in 1988. Sandown had some difficulties and Jan, as the local member for Dandenong, went to their assistance and helped the club out. She really cared about her local community.”

One of Jan’s greatest legacies was the introduction and establishment of greyhound racing’s Great Chase community series, which since its formation in 2003 has seen more than half a million dollars donated to Victoria’s disability sector.

Each year groups that care for the intellectually and physical disabled are invited to enjoy greyhound racing at their local track as part of the Great Chase, where they receive VIP treatment while cheering on greyhounds for the chance to win prize money.

“Jan’s passion in initiating and developing the Great Chase to bring all those people together was right up her alley,” Long said. “It was something she loved and it was a pure passion for her. The Great Chase has given so much back to the community and we owe her a great debt for that.”

Jan passed away at the Ballarat Base Hospital from a cancer-related illness, leaving behind an enormous legacy both in the broader community, and more particularly in the sport of greyhound racing.

SOME OF JAN’S OTHER NOTABLE ACHIEVEMENTS